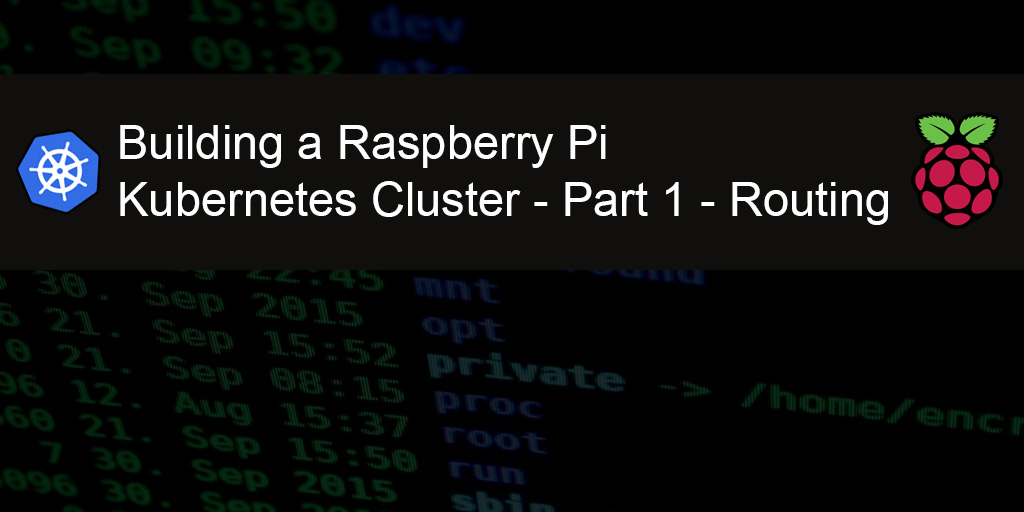 I’ve recently built myself a Kubernetes (1.16.2) cluster running on a combination of Raspberry Pi 4 and 3 devices.

I’ll be running through the steps I took to build it out in this series, with part 1 focusing on the router and internal node network side of things.

If you want to jump to the other parts in this series:

First off, here is a list of parts I used to set everything up:

To make the setup as portable as possible, and also slightly seggregated from my home network, I used the 1 x Raspberry Pi 3 device I had as a router between my home network and my Kubernetes Layer 2 Network (effectively the devices on the 8 port Netgear Switch).

Here is a network diagram that shows the setup.

Of course you’ll need an OS on the microSD card for each Raspberry Pi you’re going to be using. I used the latest Raspbian Buster Lite image from the official Raspbian Downloads page (September 26).

This is a minimal image and is exactly what we need. You’ll need to write it to your microSD card. There are plenty tutorials out there on doing this, so I won’t cover it here.

One piece of advice though, would be to create a file called “ssh” on the imaged card filesystem after writing the image. This enables you to SSH on directly without the need to connect up a screen and setup the SSH daemon yourself. Basically just login to your home network DHCP server and look for the device once it boots then SSH to it’s automatically assigned IP address.

On the Router Raspberry Pi, run the following command to change the hostname to something other than “raspberry” and change the default password too:

Setting up the Pi Router

Now the rest of the guide deserves much credit to this blog post, however, I did change a few things on my setup, as the routing was not configured 100% correctly to allow external access to services on the internal Kubernetes network.

I needed to add a couple of iptables rules in order to be able to access my Ingress Controller from my home network. More on that later though.

You need to configure the WiFi interface (wlan0) and the Ethernet Interface (eth0) for each “side” of the network.

Edit the dhcpd.conf file and add an eth0 configuration right at the bottom, then save.

Of course replace the above DNS servers with whichever you prefer to use. I’ve used Cloudflare and OpenDNS ones here.

Next, setup your WiFi interface to connect to your home WiFi. WiFi connection details get saved to /etc/wpa_supplicant/wpa_supplicant.conf but it is best to use the built-in configuration tool (raspi-config) to do the WiFi setup.

Create a new /etc/dnsmasq.conf file with the below command:

The script is the main dnsmasq configuration that sets DHCP up over the eth0 interface (for the 10.0.0.0/8 network side) and configures some nameservers for DNS as well as a few other bits.

Edit the service file for dnsmasq (/etc/init.d/dnsmasq) to prevent issues with start-up order of dnsmasq and dhcpcd:

Change the top of the file to look like this:

The lines changed above are the sleep 10 command and the Required-Start addition of $dhcpcd.

At this point its a good idea to reboot.

After the reboot, check that dnsmasq is running.

First of all, enable IP forwarding. Edit the /etc/sysctl.conf file and uncomment this line:

This enables us to use NAT rules with iptables.

Now you’ll configuring some POSTROUTING and FORWARD rules in iptables to allow your Raspberry Pi devices on the 10.0.0.0/8 network to access the internet via your Pi Router’s wlan0 interface.

This is optional, and you might only need to do this later on once you start running services in your Kubernetes Pi Cluster.

Forward Traffic from your home network to a Service or Node IP in your Cluster Network:

The above assumes a couple of things that you should change accordingly (if you use this optional step):

Persisting your iptables rules across reboots

Persist all of your iptables rules by installing iptables-persistent:

The above will run a wizard after installation and you’ll get the option to save your IPv4 rules. Choose Yes, then reboot afterwards.

After reboot, run sudo iptables -L -n -v to check that the rules persisted after reboot.

Note: if you ever update your Pi Router’s iptables rules and want to re-save the new set of rules to persist across reboots, you’ll need to re-save them using the iptables-persistent package.

Adding new Pi devices to your network in future

Whenever you add an additional Raspberry Pi device to the 8 port switch / Kubernetes network in the future, make sure you edit /etc/dnsmasq.conf to update the list of MAC addresses assigned to 10.0.0.x IP addresses.

You’ll want to set the new Pi’s eth0 MAC address up in the list of pre-defined DHCP leases.

You can also view the /var/lib/misc/dnsmasq.leases file to see the current dnsmasq DHCP leases.

This is handy when adding a new, un-configured Pi to the network – you can pick up the auto-assigned IP address here, and then SSH to that for initial configuration.

That is pretty much the setup and configuration for the Pi Router complete. As mentioned above, much credit for this configuration goes to this guide on downey.io.

I ended up modifying the iptables rules for service traffic forwarding from my home network side into some Kubernetes LoadBalancer services I ended up running later on which I covered above in the Optional Steps section.

You should now be able to plug in new Pi’s to the network switch, and they should get automatically assigned DHCP addresses on the 10.0.0.0/8 network.

Updating your dnsmasq.conf file with the new Pi’s ethernet MAC addresses means that they can get statically leases IP addresses too, which you’ll need for your Kubernetes nodes once you start adding them (see Part 2 coming next).