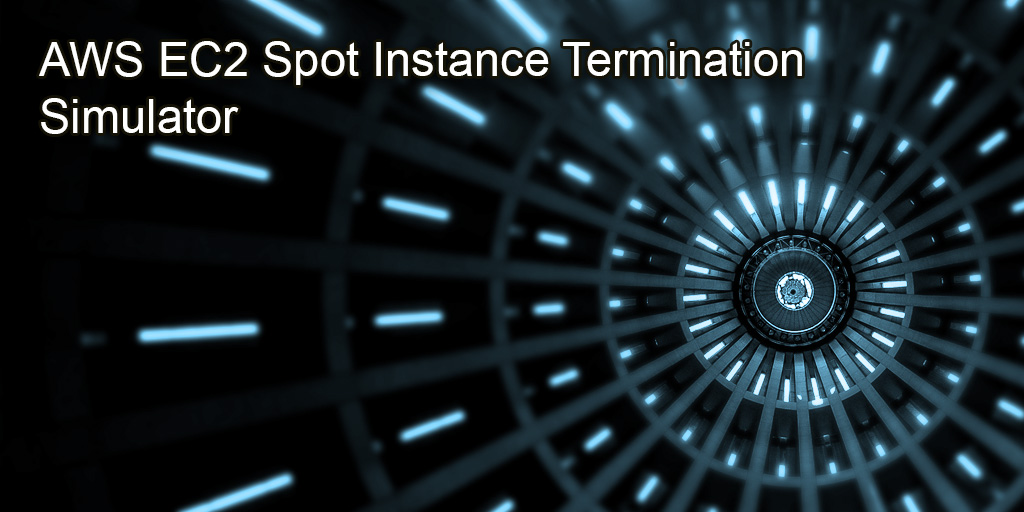 In this post I’ll explain how I created an AWS EC2 Spot Instance Termination Simulator to run on any EC2 instance.

It can signal typical monitoring scripts, applications, interrupt handlers, and more, just like a real Spot Termination signal would do.

Looking around, there aren’t really any straight forward ways of testing this behaviour.

The obvious way is to change the price you bid for spot instances to the threshold of the current market price. This is so that if there is a slight increase in demand your spot instance(s) will be terminated.

The problem with that approach is of course that you can’t easily predict when the price will move, or by how much.

When your spot instance bid price is surpassed by the current market price, a Termination Notice becomes available on one of the instance’s metadata endpoints. For example, http://169.254.169.254/latest/meta-data/spot/termination-time.

At this point the endpoint returns an HTTP 200 response. A timestamp of when a shutdown signal is going to be sent to your instance’s OS is also returned.

In the case of the newer endpoint, a JSON string is returned with an action and time. Usually the endpoint usually simply returns a 404 not found response.

The tools out there tend to monitor this endpoint to warn and action in case of a Spot Termination notice being received.

The two minute warning feature was added by Amazon back in 2015, announced in this blog post.

I’ve been looking at kube-aws/kube-spot-termination-notice-handler.

It runs as a DaemonSet (one container/pod on each node) in host networking mode. It then polls the EC2 metadata endpoint every ‘x’ number of seconds, watching for termination signals.

During polling, if one is found, it will send a kubectl drain command to it’s host node. Pods will move off to other nodes in the cluster.

I created a simple web service/API that simply returns a 200 HTTP response on the same http://169.254.169.254/latest/meta-data/spot/termination-time endpoint.

This is the legacy endpoint that spot instance termination signals go to. However, there is another, newer one that AWS now recommend using instead.

The other endpoint is http://169.254.169.254/latest/meta-data/spot/instance-action. The web service will also send a response there as a JSON string with an action and time field.

Have a look at the code and Docker image at the following locations:

Identify a candidate EC2 instance that you don’t mind messing with.

Warning: the following steps will override the entire EC2 instance metadata service. No other metadata endpoints will work. This is because they’re not implemented in this web service.

Deploy the docker container (a Kubernetes deployment / service manifest is in the git repository).

Ideally, create a nodeSelector / label up in the deployment manifest before you kubectl apply it. This is so you can get the pod to run on the specific node you want to test.

The service is a NodePort service, exposing the port on the host it runs on.

List the service and the pod (and find the kubernetes node the pod is running on):

Take note of the NodePort the service is listening on for the Kubernetes node. E.g. port 30626.

Perform some trickery to proxy traffic destined to 169.254.169.254 on port 80 to localhost (where the container runs). This is so that the fake service can take the place of the real one.

SSH onto the Kubernetes node and run:

As a result, it should return a 200 OK response with a timestamp from the fake service. This is the same as the real one would.

Looking at how the kube-spot-termination-notice-handler service works specifically:

This service runs as a DaemonSet, meaning one instance per host. The instance on the node you set the simualtor up on should immediately drain the node. The instance won’t actually be terminated as this was of course just a simulated termination.

If you’re not running on Kubernetes and are using a different spot termination handler, don’t worry. The system you’re using to monitor the EC2 instance metadata endpoint should still take action at this point.

I’ve been working on a very cool project that involves the use of Microsoft Azure, TeamCity and Octopus Deploy.

I have created an Azure PowerShell script that deploys VMs into an Azure Subscription (Web machines that run IIS) as a part of a single Azure Cloud Service with load balancing enabled. As such, the endpoint ports that I create for Octopus tentacle communication need to differ for each machine on the public interface.

I wanted to fully automate things from end-to-end, so I wrote a very small console application that uses the Octopus Client library NuGet package in order to be able to communicate with your Octopus Deploy server via the HTTP API.

The OctopusConfigurator console application should be run in your Azure VM once it is deployed, with 4 x parameters to specify when run.

It will then establish communication with your Octopus Deploy server, and register a new Tentacle endpoint using the details you pass it. The standard port number that gets assigned (10933) will then be replaced if necessary with the correct endpoint port number for that particular VM instance in your cloud service. For example, I usually start the first VM in my cloud service off on 10933, then increment the port number by 1 for every extra VM in the cloud service. As the deployments happen, the console application registers each new machine’s tentacle using the incremented port number back with the Octopus master server.

Once the Azure VM deployment is complete, I tell the VMs in the cloud service to restart with a bit of Azure PowerShell and once this is done, your Octopus environment page should show all newly deployed tentacles as online for your environment. Here is an example of an Invoke-Command scriptblock that I execute remotely on my Azure VMs as soon as they have completed initial deployment. What I do is tell the VM deployment script to wait for Windows boot, so once ready, the WinRM details are fetched for the VM using the Get-AzureWinRMUri cmdlet for Azure, which allows me to use the Invoke-Command to run the below script inside the guest VM.