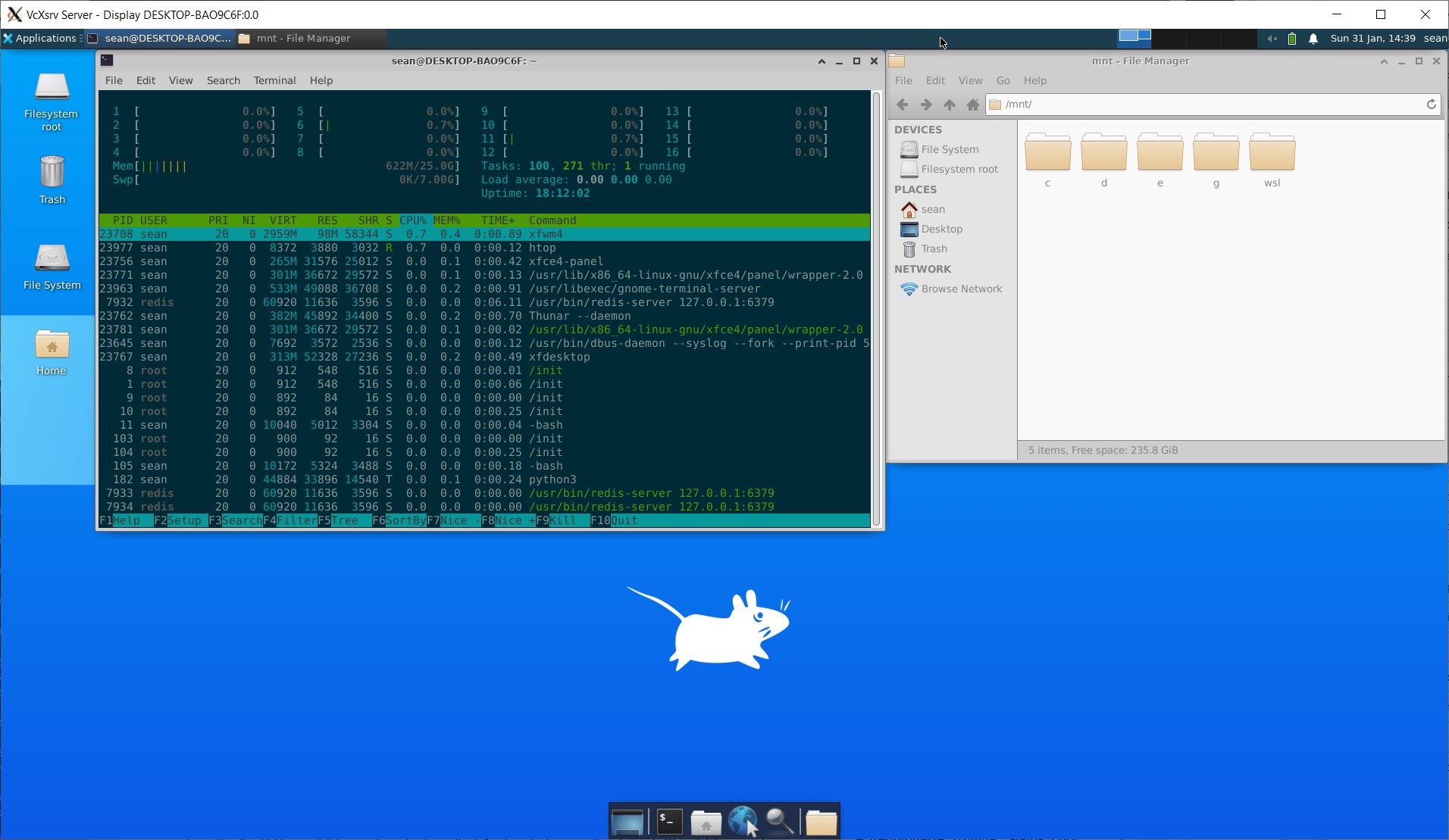 I needed to set up a WSL2 GUI recently on my machine (WSL2 running uBuntu 20.04.1 LTS). I found a guide that runs through the process but found that a few tweaks needed to be made. Specifically, the communication to VcXsrv was being blocked by Windows Firewall.

There were also a couple of extra tweaks needed for audio passthrough using PulseAudio and setting a windowed resolution.

Setting up a WSL2 GUI X-Server in Windows

Start by installing xfce4 and goodies.

If you’re running Kali you should use:

During the install you’ll be prompted about which display manager to use. This is up to you, though I personally chose lightdm.

Download this .zip package which contains VcXsrv and PulseAudio along with some configuration and a shortcut to launch.

Extract it to the root of your C:\ drive. You should end up with contents under C:\WSL VcXsrv.

Run the vcxsrv-64.1.20.8.1.installer.exe installer in this folder, choosing defaults for the install.

Once installed, you’ll want to enable High DPI scaling for VcXsrv in Windows.

Next, edit the startWSLVcXsrv.bat batch file and change the last line that reads ubuntu.exe run to one of:

Pin the WSL VcXsrv shortcut somewhere convenient like the taskbar.

Next you need to allow inbound traffic to Windows for VcXsrv and PulseAudio.

I personally added the following to ExtraParams under the XLaunch node of config.xlaunch. This sets windowed mode to 1920×1080 for monitor #1 on my machine.

With all of that setup out of the way, you should be able to simply launch VcXsrv from the pinned shortcut and everything should work.

Try it out and you should get Desktop up and running for your WSL2 environment.

PulseAudio passthrough should also be available if you check your sound / volume settings. Try an audio test using alsa-utils:

Kudos to this guide on reddit for most of the setup instructions. As mentioned before, I needed to configure my firewall and also added some tweaks for windowed mode.

If you find your VcXsrv Server display window is blank when launching, try the following:

This takes the IP address of your host machine (conveniently used as a nameserver in your WSL Linux environment for DNS lookups) and sets it as the Display remote location (with :0 for the display number appended).

Now, try to launch a xfce4 session with:

If all goes to plan, the session should target your machine where VcXsrv Server is running and your display window should come to life with your WSL environment desktop.